Some time ago someone at my work showed me a 3-axis linear YAMAHA robot which was taking up valuable warehouse space, and ready to be scrapped. I couldn’t resist the temptation to start a refuge for abandoned robots so I took the poor thing home. 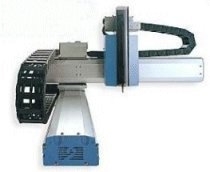 Unfortunately the victim arrived in a poor state. All the cables had been cut off during decommissioning! However, I did get some docs (programming manual and external wiring diagrams only) with the new resident of my refuge. It took me a couple of evenings to reconnect all the cables again (about 120 wires to solder). It also seemed that the controller had been wired for 200 volts, since originally it was part of a machine originating from the land of the rising sun. Looking into the primary power circuitry quickly revealed that the power transformer had several (unmarked) taps. After supplying the unit with 100 volts to be on the safe side, I quickly found out wich tap setting to use…. The next step was to find out how I could communicate with my new lodger. One 25pin D-connector bore the label “host”, so I directed my attention there. A comm-cable was quickly wired up and fortunately I got it right the first time. With Hyperterminal running on my PC, it didn’t take long to get some response after playing with various baus-rates. The responses indicated that the commands I send where missing a start code (@). Now, simple commands preceded with a ‘@’ produced reactions like ‘syntax error’, ‘interlock broken’ etc. In the schematics I found a reference to a signal called Interlock and after grounding the respective connector pin, I could move on to the next challenge!