Just a short little project I completed recently. A friend of mine was setting up a small PC to use on his sailboat and needed a power supply for it. The computer needed 2 amps at 5V. A linear regulator would have been easy to construct, but since on a sailboat battery power is somewhat scarce, a supply with better efficiency would be nice. So, time to build a switcher! I happened to come across some defective electronic ballasts recently, so, i had a parts source

However, the ferrite transformers were glued together and the HV PowerFET’s used had a rather high ON-resistance.

So only the housing, terminals and the transfomer were candidates for recycling. After an hour in the kitchen oven at 120 degrees C, the glue that held the cores together had softened enough so the core could be pulled apart without damaging it.
In the junkbox I found a BUX10 (RdsOn<0.05 Ohm) and a heavy Schottky diode, fit for the purpose. A TL494 was chosen as controller. Driving the FET presented a challenge. The FET being in the ‘high side’, needs 10V gate drive to get into the low resistance range. Eventually, a bootstrap circuit consisting of one diode and one cap turned out to be enough to create the drive voltage. Since switching off the FET was still a bit slow, an extra transistor was used to discharge the gate when the FET was supposed to stop conducting. Success! Even at 2.5 A output current the FET hardly heats up. I measured an efficiency of 75% at 1.8A and even better at higher loads. Not bad, compared to 40% for a linear solution.
To make sure that the computer would not get roasted in case the supply would malfunction, an SCR crowbar was added which shorts the input in case the output voltage becomes too high. When that happens, the fuse in one of the supply lines will prevent draining the ship’s battery really fast! 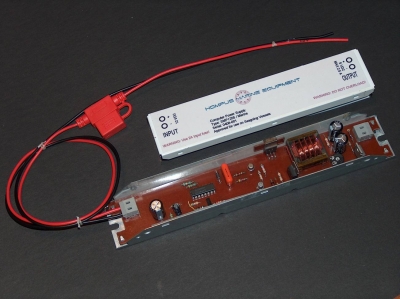 The complete circuit was transferred from the breadboard to a PCB which fits in the original case. Since my PCB milling machine is not ready yet, I more or less milled the tracks freehand after creating a layout on the computer and transferring the hole pattern first.

A new label on the cover, for the professional look completed the project.